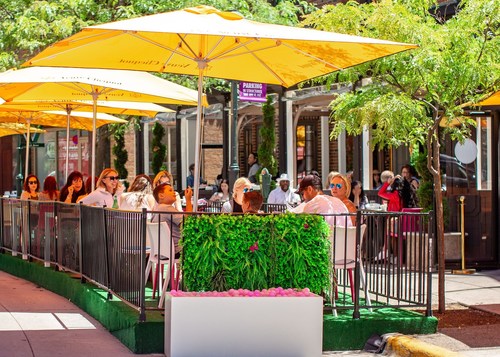 Restaurant 220, on Merrill Street, expanded into an area of street parking. (Photo: Facebook)

The party's over in Birmingham, where an almost Paris-like atmosphere of outdoor restaurant seating was made possible by the pandemic.

The city ended its emergency order just before the holiday weekend and is requiring businesses that spilled into streets and onto sidewalks to retreat by July 14, Bridge Michigan reports. The Delta variant and Michigan's low vaccination rates are threatening to bring about another spike in Covid cases come fall or winter, but for now, the city's zoning and planning director says he cannot maintain the temporary business regulations with statewide restaurant capacity orders lifted.

Cue the backlash from "outdoor-centric" restaurateurs:

Jeremy Sasson, owner of the restaurant Townhouse in Birmingham ... said he felt that Birmingham did not take the input of restaurant owners into consideration when choosing to end expanded outdoor service.

“No one asked me, ‘What are you going through right now today?’” he said. “...It's harder today to run a restaurant than it was before COVID.”

Sasson said he’s spoken with around 15 other Birmingham restaurateurs, and they’re frustrated about having to remove their patio expansions.

Their financial investments in outdoor dining experiences will have to be “thrown in the garbage now,” he said.